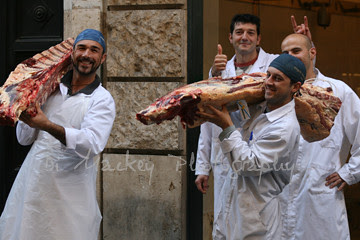 Sigh, I hope these guys were okay last night.

After a long match, made longer by half an hour of extra play because of the 0-0 score, the European Championship match was decided by 5 players from each side taking turns to kick the ball directly into the goal ...writes the kiwi woman more familiar with rugby

Nail-bitingly terrible, although I was so sure the much-revered Italian goalie, Buffon would save Italy. Sadly, Spain's goal-keeper continued with his rather impressive series of saves and Spain is through - Italy is out.

Oh, and the butcher guys ... they were at work in the narrow back streets of Rome, close to the Pantheon.

look at the smiles on those guys.

They were lovely, and so early in the morning ... then again, perhaps even the street sweepers are happy in Rome, writes she who is entirely besotted with the city ;)

Soccer? Isnt that that game with all the man love?
I like the part - you know - after putting the round ball in the net thingy. You know - when they run around the field with ther shirts over their heads trying to find the other players "blindfolded". It's like a topless version of pin the tail on the donkey - albeit on a much larger scale - excititng yes? :)

oh, how fickle is the kiwi traveler, say the Spanish. We were so sure you loved US and our sunshine drenched cities....

:) If it makes you feel any better, the Spanish HAD to win that game to get over a huge national complex about playing against the Italians...

Lol, I had to read your comment to Gert, Mark. I've tried to explain the kiwi thinking on 'soccer'.

You kind of captured it there in your comment.

Oh, I know w-w. But Italy, I even have a football club I've followed for years in Italy. I heard about the problem Spain had with beating Italy ... sigh, no sign of it that night.